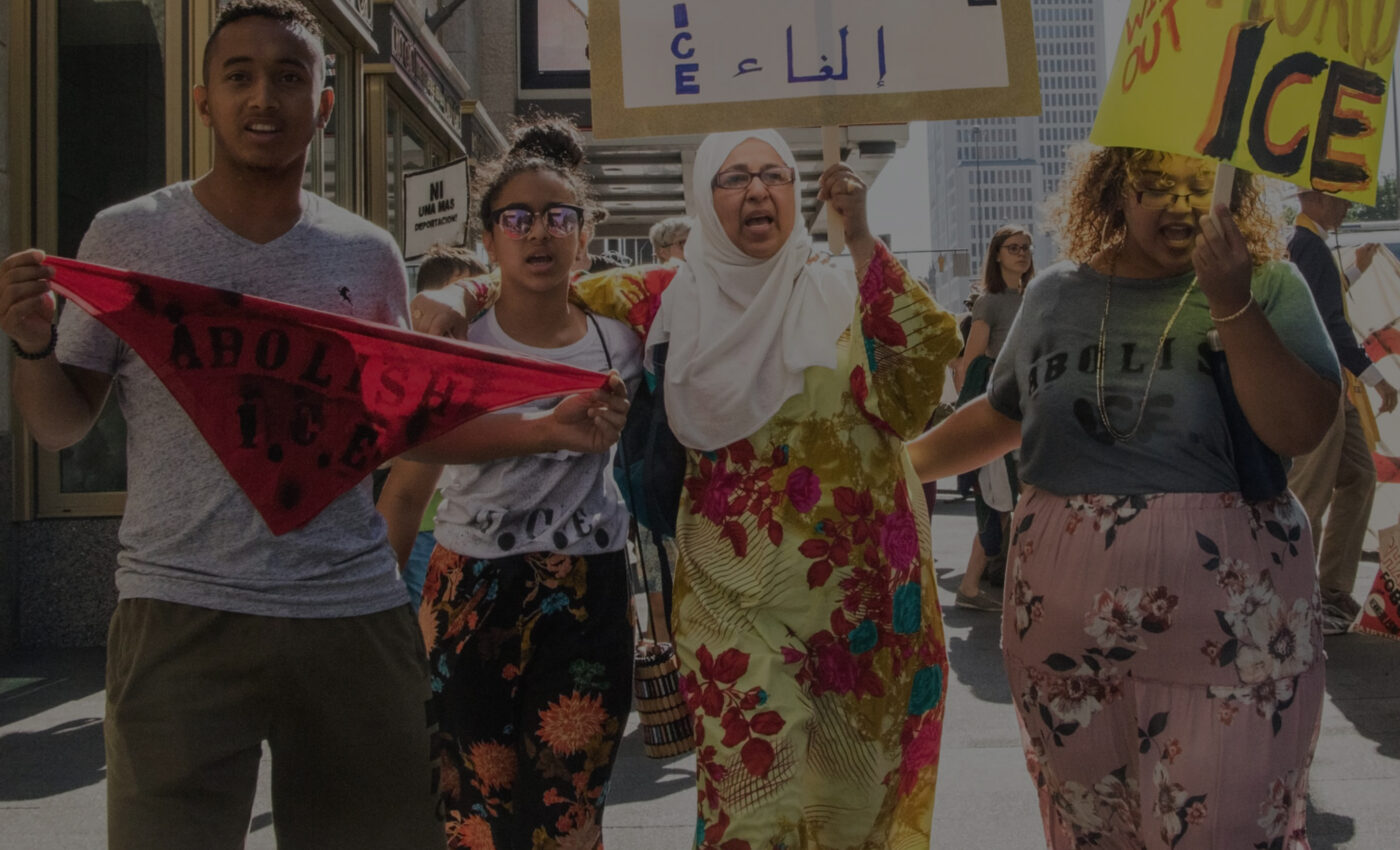 Drug policy and immigration policy have been an insidious pair in the United States since the country’s first drug control laws. As early as 1875, drug laws stoked anti-Chinese hysteria by depicting Chinese men as “opium addicts.” Anti-immigrant policies continued into the 20th century, and the drug war ramp-up in the 1980s and 1990s formally tied drug war logic to immigration policy, explicitly targeting non-citizens for drug involvement. Since then, nothing has changed.

Irrational and racist logic rooted in the drug war falsely associates Latinx and Black immigrants with drug use and drug activity. As a result, the U.S. has created the largest immigrant exclusion, detention, and deportation structure in the world. Drug use is often the reason for removing immigrants or denying them access to services, particularly Latinx and Black undocumented immigrants and green card holders. Drug war thinking has led us to surveilling immigrants, turning anything related to drugs into a severe crime, deporting people in record numbers, and enacting harsher punishments on non-citizens.

The drug war has its roots spreading throughout our lives, arbitrarily upending the lives of immigrants, sowing fear and anxiety in neighborhoods, and tearing apart families. It’s still spreading — and we can do something about it.

Though criminalization of drugs and immigration restrictions have been formal immigration policy for over a century, both were greatly ramped up in the 1980s and 1990s. Now, many drug law violations, including violations many people would consider minor, like the sale of $10 worth of drugs, subjects non-citizens (including green card holders) to mandatory immigration detention and deportation, and makes people ineligible for lawful status or asylum — punishments significantly harsher than those U.S. citizens would be subjected to.

Punishments significantly harsher than those U.S. citizens would be subjected to

The drug war is at the center of our deportation machine

When many people are charged with a criminal offense, they have no better option than to accept a plea deal in order to avoid a trial. Nationwide, 97% of people accept plea deals. Many non-citizens do so without knowing or understanding the immigration consequences of a conviction that they accept as part of a plea deal, which can result in them being torn from their family and community and exiled to another country. Diversion programs intended to shield people from drug convictions do not always shield them from federal immigration consequences, so even successful completion of the program can still result in immigration enforcement. And, most states do not have mechanisms to expunge criminal convictions to prevent their consideration for immigration purposes. Once a conviction occurs, many non-citizens are subject to cruel immigration policies and enforcement, which can occur at any point and without notice.

Torn from their family and community and exiled to another country

U.S. prohibition creates an illicit market that relies on drug production and supply from regional countries. A great irony is that the U.S.’s international drug policy and drug interdiction contributes to the violence and instability in Latin American countries that drives many people to immigrate to the U.S. With no support and subject to criminalization, non-citizens are often sent back to the dangerous circumstances they were originally fleeing. Immigrants who use drugs are less likely to receive the adequate healthcare, treatment, and public health services to address their needs after being deported from the U.S.

Despite having lived in the U.S. since the age of eight as a legal permanent resident, and despite having served in the Army with two deployments to Afghanistan, Miguel Perez, Jr. was deported back to Mexico in 2018 because of an earlier drug conviction for which he had already served time. Living in Tijuana, Miguel was separated from his two children and extended family and suffered from symptoms of post-traumatic stress disorder (PTSD) stemming from his military service — the very symptoms that had caused him to start using drugs. The drug war fuels the deportation regime, ripping apart families and destroying lives.

As people recognize the harm of marijuana prohibition, more states have legalized and decriminalized marijuana for adult use. Because federal law still defines marijuana as a prohibited controlled substance, non-citizens living in these states continue to face immigration consequences at the federal level. In states where marijuana is legalized or decriminalized, ICE arrests continue, and immigrants can face the disproportionate, devastating consequences of detention and deportation.

The country’s first drug control laws, passed in San Francisco in 1875, were tied to general anti-Chinese hysteria, which led to the Chinese Exclusion Act of 1882. Sensationalized portrayals by media and politicians depicted Chinese men as “opium addicts” and threats to white women, despite widespread use of opioids by white people across the U.S. at the time.

Drug law violations became a new category of immigration penalties in the Narcotic Drugs Import and Export Act of 1922.

In 1952, the passage of the Immigration and Nationality Act expanded upon previous drug provisions for deportation, including banning those whose immigration officers had “reason to believe” were “drug addicts” or “illicit trafficker(s).” Laws passed in 1956 and 1960 further expanded the drug-related grounds to deport or exclude people.

Congressman Lawrence Smith of Florida expressed a sentiment reminiscent of the earlier linking of immigrants and drugs when he stated during a 1989 hearing before the House Judiciary Committee that “aliens coming across the border seem to be prone to more violent kinds of crime, more drug-related types of crime,” and that by allowing them to remain in the U.S., “we are unleashing an army of criminal aliens on American citizens.”

In 1986, Congress passed the Immigration Reform and Control Act (IRCA). Best known for creating an avenue to legal status for unauthorized immigrants — dubbed “Reagan’s Amnesty” by its detractors — it also criminalized the hiring of undocumented workers and drug smuggling offenses. The law required that the U.S. Attorney General move to deport immigrants with criminal convictions as quickly as possible, laying the groundwork for the current political context for mass deportation of immigrants.

Two laws signed into law by President Bill Clinton in 1996 – Illegal Immigration Reform and Immigrant Responsibility Act (IIRIRA) and the Antiterrorism and Effective Death Penalty Act (AEDPA) – set the stage for the escalation of the mass detention and deportation of immigrants. The previous definition of “aggravated felony” was vastly expanded to cover more than 30 types of offenses, including drug offenses. The vast majority of immigrants with a drug conviction are now subject to mandatory detention for anywhere from months to several years while they fight their immigration case.

From 2007 to 2012, drug possession and other drug law violations were the most serious conviction for many people targeted for mass deportation — a 22% increase was recorded in this five year span, for a total of 260,000 people, according to a study by Human Rights Watch.

After “illegal entry,” drug offenses were the most common offense among people who were deported in 2019.

The word “conviction” means the same thing for U.S. citizens and non-citizens living in the United States.

Immigration law counts some offenses as convictions for deportation purposes, even if the state does not consider the offense to be a conviction. For example, New York has decriminalized some marijuana possession offenses by making them violations. But these offenses continue to be considered drug convictions, which under federal immigration law carries harsh consequences, like deportation and ineligibility for legal status.

U.S. immigration policies cruelly tear families apart and often send people back to countries where they have no support. The drug war, with its deep ties to xenophobia, has fueled mass detention and deportation. Drug policies should not be used as a weapon to discriminate against, deport, or punish immigrants.

The Drug War Breaks Up Families

Immigrants are not the only ones subject to this kind of unequal treatment. Employees, job applicants, and parents who use drugs also face discrimination. Instead of receiving health and harm reduction services, they face harsh punishments.

Detentions and deportations often tear people away from their loved ones. Our housing and child welfare systems do the same, using the drug war as a tool to separate families.

These extreme consequences are deeply rooted in other systems as well. Punishments for students, tenants, and people receiving public benefits who are suspected of using drugs can be harsh and life-changing.

People applying for public benefits face similar challenges and are often blocked by drug war policies that keep them from meeting their basic needs.